Golden Garcia Torres, aged a 16-year-old Filipino motorcyclist, passed on Thursday from wounds supported in an accident at the Chang International Circuit in Buri Ram last Sunday in the Underbone 150cc occasion.

As per an announcement discharged by the International Motorcycling Federation (FIM), the youthful motorcyclist experienced four days of getting crisis treatment in Buriram Hospital’s emergency unit being articulated dead. 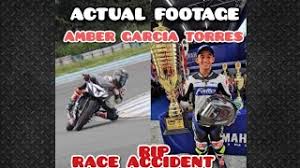 The accident happened during the third lap in Race 2 when Torres slammed into another contender at Turn 7, leaving him face down and oblivious on the track during the season finale of the 2019 FIM Asia Road Racing Championship.